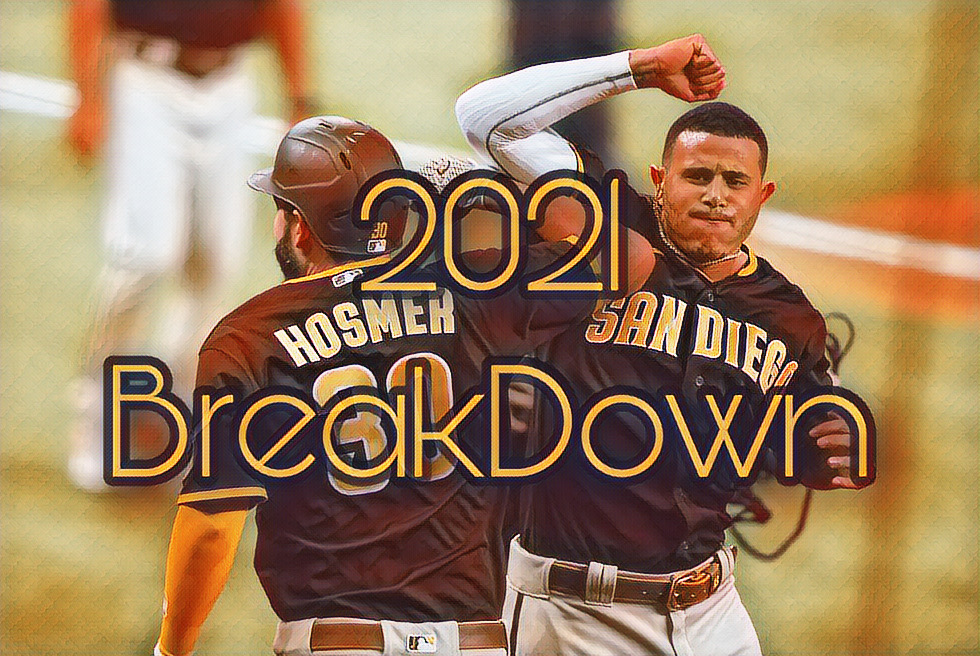 The Padres had probably THE most active offseason out of all the MLB teams. Of course everyone is aware of the Blake Snell and Yu Darvish blockbuster trades, but how do the Padres shape up for the 2021 season overall? We’re breaking down the entire Padres Roster and telling you what we’re betting on for them.

Who The Padres Lost

First off, the Padres either let go, or shipped off more than a dozen major leaguers this offseason. The list includes 7 pitchers, 3 infielders, 2 catchers, and 2 outfielders. Some were major contributors like Kirby Yates or Trevor Rosenthal. Others were still trying to find their footing like Luis Patiño and Francisco Mejía.

Who The Padres Added

In return the Padres narrowed down their roster to increase their overall talent level. Of the 3 starters they grabbed, 2 are now the aces of the staff. They added two relievers capable of closing, flipped one young catcher for another, and signed one of the most sought after international rookies who’s already made it clear he wants to be ROY.

Austin Nola was one of the big pickups for the 2020 Padres after he broke out with the Seattle Mariners. He broke out as a 30 year old rookie and shot up the rankings thanks to the lack of MLB catching depth right now. He’s an excellent defender as well as offensive threat threw his first 127 MLB games. It’s also worth noting that he can also play at 1st or 2nd and is likely to play 75%+ of games this year. More of the DH someone comes back out of necessity.

Hosmer finally showed his best self to his new home in San Diego. The kind of hitter that helped lead the Royals to unlikely back to back World Series appearances with a ring to show for it. He slashed .287/.333/.517 during the regular season with the kind of hitting chart that made Hosmer a champion. The only thing missing from his old self is his walk ability. If he can up his walk rate a couple % this season, Hosmer’s .900’s OPS days may not be over.

We’ll be honest, we’re not convince Cronenworth will start at 2nd base. Yes he was a ROY candidate in a shortened season, but that’s part of the problem. Cronenworth only has two very different sample sizes. A first half that saw him hit .356/.411/.624, and a second half that saw him get abused down to .183/.275/.268.

With the Padres investment in international star Ha-seong Kim, we think Cronenworth will become the defensive utility specialist for the Padres in 2021. Still, he’ll probably play almost a starter’s worth of innings. And on the brighter side, no one can adapt to Cronenworth’s stellar defense or speed across the field. He ranked in the 92nd percentile in sprint speed and 89th in Outs Above Average. To us, he’s the left handed Kiké Hernandez on paper.

GET THAT BAG EL NINO!!! Congrats to one of the most talented players in the MLB not only committing to a franchise, but for all his hard work paying off for himself and his future family. As a primarily Dodger page, we are beyond excited to see Tatis more than anyone outside of Padre’s fans. Enjoy him San Diego.

They could practically rename Statcast to TatisCast the way he sets the leaderboard, my god.

We won’t even talk long abut Tatis. As long as he’s healthy he’s a top 5 player in baseball even with the occasional rough stretch. When he’s on, there is no one you’d rather have at that plate. He’s as incredible as Mike Trout and at only 22 it’s terrifying to think that Tatis is probably 3 to 5 years away from his best season. The real question with this kid isn’t even when he’ll win MVP? We want to know HOW MANY MVP’s this stud will collect?

No one is going to be more upset about losing to the Dodgers than Manny. After all, he lost his entire contract on a bet with a fan in the stands. Not really, but after having his best statistical season in 9 years, getting swept in the NLDS may fuel Manny to new heights. He slashed .304/.370/.580 for an oPS+ of 158 in 2020. He was 3rd kin MVP voting and won his first silver slugger award. He’d be a gold glove winner too if not for Nolan “I’m An Award Hog” Arenado.

It seems that Machado has finally adjusted to the NL after a lower-than-expectations season and a half transition. He’s in his prime right now too at 28. His $30MM a year weighs over his head if he doesn’t produce at elite levels. But he’s an elite 4 tool player, even his lows are still good for most players. Machado will be anywhere from good to the best. Time will tell for this season as always.

The Padres have the best left infield for years to come if they want. But we have a sneaking suspicion Machado gets moved before the Padres win a ship…

Pham needs to reprove himself at the point or he’ll likely find himself benched quickly in this deep of a season. He’s still quick and strong so 20-20 is never off the table. He slashed on .211/.312/.312 in 31 games in an injury riddled 2020. He also has been adjusting very slowly to the NL himself after success with the Rays.

Grisham was a great pickup in the end for SD. The top prospect made a mistake in the playoffs for the Brewers that may have ended his career with the city out of pity. Jokes on them though because Grisham finished the year as a top 3 CF defensively by at least some metrics. He increased across his entire slash line and showed elite potential on the base paths. This year will be crucial for Grisham’s confidence and overall trajectory. Another leap forward would almost take him to elite status across the league.

Finally the Padre tenured Myers. They never gave up on him and Wil finally broke out in 2020. After 7 seasons of OPSing in the mid-high 700s, Myers exploded for a .288/.353/.606 line in 55 games. He did outperform some of his expected statistics, but he still ranked extremely high in expected rates across the board.

He is 30, but we think Myers still has areas to improve that are very attainable.

Point is, Myers is a very gifted all around player who may be able to climb even further than his 2020 breakout. He’s more likely to regress from last year’s highs, but we wanted to point out his upside even now.

Caratini will be at least Yu’s personal catcher. They had a Cy Young worthy performance together in Chicago last year and the Padres said they don’t want to mess with success. After all, with Yu’s movement he needs a guy who ranked in the 98th percentile in framing. He’s a decent contact hitter with almost no power or speed. Overall, he’ll be an 8 spot batter once or twice a week as the backup catcher. He and Nola should be a top NL backstop combo overall.

Kim may very well be the starting 2nd baseman by the end of spring training. Depending how he reacts to MLB talent and how Cronenworth backs up his rookie campaign will decide ultimately. But as of right now, the new guy has more to prove to us. But he’s quoted saying he wants Rookie of the Year. Excited to see what he brings to the MLB.

We don’t want to waste much time on how good this rotation is. It’s disgusting. It has every bit of potential as the other top 5 rotations to end the year as statistically the best. Darvish deserved the 2019 Cy Young in our opinion and his reputation needs to change after the enlightenment of the 2017 Astros scandal. Snell proved last year that he can handle the Dodgers which is Padres priority #1 from here on out.

Lamet was on the verge of greatness before going down with an injury. He avoided injury and may be a full go at Spring Training. He’s without a doubt a name to watch this year as a dark horse Cy Young candidate. The final starting pitching move the Padres made was for former Pirate, Joe Musgrove. He only got better throughout the 2020 season even though he was on a sinking season with no hopes. But statcast says there is frontline talent here.

Finally, we have Paddack possibly on his last chance to impress San Diego, and potential superstar, Mackenzie Gore. Paddack has the Hall of Fame in his mind, and some scouts see Hall of Fame written all over Gore. One of them seems bound to pan out for that fifth spot. Not to mention, Clevinger will continue to rehab for either late this year, but most likely next year.

We like this pen. Pomeranz and Pagan have been good for the team. Morejon throws absolute gas from the left side. Kela is another former Pirate that performed well despite the situation. And adding Melancon adds a veteran presence that can be easily undervalued. The Padres should be successful a good 80% of the time when they hand it off to these guys. They’re not the best in the NL right now, but they could wind up there.

These Padres look playoff bound. They are one of the top 5 teams in the NL and have the depth to stay there even with a few season curveballs. It will be hard to dethrone the Dodgers still, but as long as the Padres make it out of the Wild Card round, the 2021 season is a success. If they can do that, they have about as good of a chance as any (other?) division winning team.