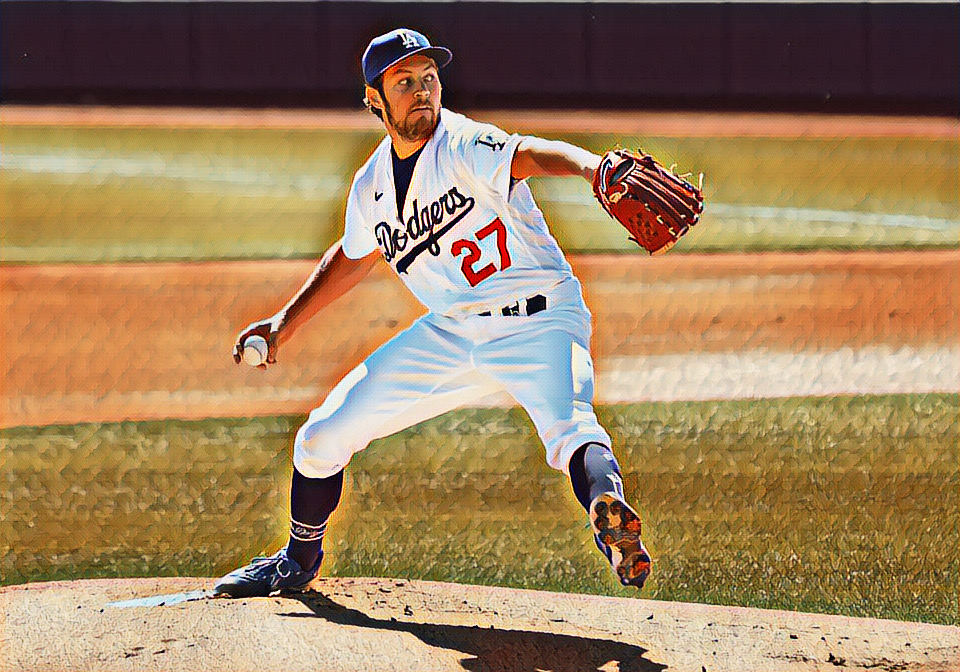 Bauer was the most highly debated name this offseason, and now he represents one of the highest paid players in baseball history in possibly one of the greatest rotations in history. There is no true number 1, there’s 3 and here’s how the newest member is projecting.

We all know Bauer was the 2020 NL Cy Young winner so there isn’t a lot of point deep diving his 2020 stats. Instead we’ll just give you the basic stats quickly, but then talk about WHY Bauer improved so much in 2020 and if we think it’s sustainable.

Bauer looked at Gerrit Cole and said anything you can do I can do better. He upped his spin rate on just about every pitch of his this last year and the results were phenomenal. He lead all of baseball in fastball spin rate and batters did not respond well. Batters slashed a measly .140/.228/.310 against the pitch he threw 40% of the time. His slider spins more than any other of his pitches and batters faired even worse with a .075/.110/.132 line.

Even if this is the pine tar (or whatever sticky substance) effect, he’s not alone in using it.

Bauer had a career year as far as control. Usually Bauer is below average in walk rate, but in 2020 Trevor had a career low 6.1% walk rate. Over a full 2% better than his career and the MLB average. Some regression would be expected, but a WHIP of 0.79 has room to balloon and still be successful.

He also shifted his pitch mix around and started by almost eliminating his changeup. Usually Bauer threw his change about 10% of the time every season. In 2020, he only threw it 3 times for a % of 0.3.

Instead Bauer threw his fastball over 40% of the time for the first time since 2015. His cutter rate has doubled since 2018. His curveball usage has been steadily declining since 2017 to make way for his wipeout slider which he threw at a career high in 2020.

Bauer hasn’t really had an advantage over batters of either side of the plate throughout his career. That changed in 2020 as he began to obliterate right handed batters. Even though he pitched about the same amount of innings against lefties and righties last year, he was EXCEPTIONALLY better against fellow righties. Check out these splits.

We don’t think it’s a coincidence 2 of the 3 NL Cy Young contenders came out of the NL Central last year. It was one of the weaker divisions in baseball offensively and Bauer benefited more than most. 8 of his 11 starts came against teams that finished the year under .500. 5 of his 16 earned runs on the year came from those 3 starts. They also accounted for 2 of his 4 losses last year.

Now Bauer moves to a crowded NL West but at least he doesn’t have to pitch against the Dodgers themselves. But we’re worried that Bauer may not be as good against good teams…

Which brings us to over/under Bauer’s projections and what’s changed for him since last season.

Bauer managed 2.5 WAR in 73 IP and 11 starts in 2020. As long as he stays healthy, he’s looking at about 30+ starts this year which at a minimum will lead to 150+ IP for Bauer. Or roughly twice the innings from 2020. If he performed exactly the same that projects Bauer for 5 WAR. A full 0.6 WAR more than the projection.

Granted, that’s assuming Bauer pitches at a cy young level (unlikely), however we’re also conservatively estimated how much Bauer pitches next year. Yes he is likely to regress from his ridiculous 2020 stats, but he’s also likely to pitch closer to 180 innings this next year.

Now mix in an elite defense behind him, a pitcher friendly ball park, and even if Bauer himself loses some of his ace stuff it seems to us that 4.4 WAR is a very safe projection that we expect him to pass in his last 8 starts.

Dave Roberts is notorious for pulling his starters earlier in games than they would like and that was in normal seasons. Now Roberts is going to be thinking about stretching out his arms for another World Series run in a year no one has built up innings. The 2020 Dodgers were also infamous to opposing bullpens last year with the preposterous amount of runs scored from the 7th inning on.

To us this means two things as far as Bauer’s record. He’ll win less games because he gets pulled after 6 innings, but that also means he’ll lose less games because the Dodgers offense will save him more often than not in his bad starts.

His career averages are weighing his projections down. No, he won’t have a sub 2 ERA again. But 3.33 is a safe high for the new ace. He didn’t improve for no reason. His best season is probably behind him, but Bauer still looks like a sub 3 pitcher this year. Same goes for WHIP. Bauer improved his control and increased his whiff rate thanks to some extra spin. Is a 0.79 sustainable? Again no. But we say Bauer falls in between 0.90 and 1.10.

Overall, we expect a great year for Bauer. Our expectations look closer to this. That is if Bauer pitches with both eyes open…